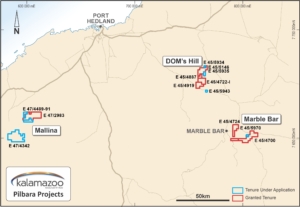 The DOM’s Hill Lithium project has a landholding of 122km2 and is located ~50km from Pilgangoora.  The Project contains a similar geological setting with target host rocks strongly analogous to that of the nearby world class Pilgangoora (Pilbara Minerals ASX: PLS) and Wodgina (Albemarle NYSE: ALB/Mineral Resources ASX: MIN) pegmatite-hosted lithium deposits.  The project geology for the region, and the prospective granite-greenstone contact zone, or “Goldilocks Zone”, is clearly shown in the WA regional scale aeromagnetic image here.

Further details about Kalamazoo’s current plans for the DOM’s Hill Lithium Project can be found here. The Marble Bar Lithium and Gold Project has a landholding of 125km2 and is located 6.5km east of Marble Bar.

Similar to Kalamazoo’s DOM’s Hill Project, recent technical reviews of the Marble Bar Project have found this project is also highly prospective for lithium mineralisation due to its favourable location on the margin of the Moolyella tin and tantalum alluvial field.  In addition, within these tenements, there are known mapped occurrences of lithium-bearing pegmatites. Whilst the known lithium occurrences are largely comprised of lithium micas (i.e., lepidolite) this area demonstrates the positive characteristics and empirical evidence favourable for the presence of spodumene-bearing pegmatites.  The Project has not been the subject of any modern exploration for lithium, although encouragingly, Global Lithium Resources Limited (ASX: GL1) has recently announced the discovery of the nearby 10.5Mt @ 1.0% Li20 Archer deposit also located on the margin of the Moolyella tin and tantalum field, approximately 25km to the north.

Further details about Kalamazoo’s current plans for the Marble Bar Lithium Project can be found in the DOM’s Hill section of this page and here. The Mallina Gold Project has a landholding of 239km2 and is located 100km south west of Port Hedland.  It is prospective for epigenetic gold mineralisation associated with the Mt Wohler Shear, a prospective splay of the gold mineralised Mallina Shear Zone.

The Mallina Gold Project lies within a larger area currently undergoing significant gold exploration by TSX-listed Novo Resources (TSX: NVO) and ASX-listed De Grey Mining (ASX: DEG), DGO Gold (ASX: DGO), Coziron Resources (ASX: CZR), Arrow Minerals (ASX: AMD), Venturex Resources (ASX: VXR) and others.  The Project contains the north-east trending Mt Wohler Shear, a major splay from the gold mineralised Mallina Shear to the north.  As there has been no reported systematic historical gold exploration along this prospective shear, this provides a significant opportunity for Kalamazoo.  The Project is underlain by folded and faulted siliciclastics, volcanoclastics and mafic sills of the Mallina Basin, which is part of the De Grey Supergroup (3020 to 2930Ma).

Further details about Kalamazoo’s current plans for the Mallina Gold Project can be found here.